This is a log of all updates to Pixel People

It's Utopia's first Birthday, and we're going to celebrate our survival as a species with a brand new Content Update! Please keep your feedback and suggestions coming to support@lambdamugames.com, and we will continue to work on making the game better with each update!

Send your feedback and queries to support@lambdamugames.com and follow us on facebook for the latest updates! www.facebook.com/lambdamugames 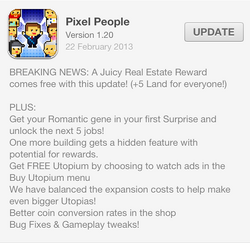 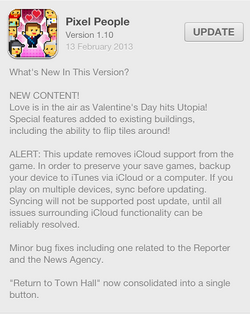 Retrieved from "https://pixelpeople.fandom.com/wiki/Game_Updates?oldid=33190"
Community content is available under CC-BY-SA unless otherwise noted.