Utopia HQ is a type of building.

"Utopia Corp's mission control was set up to closely monitor the stranger discoveries being made in towns. Samples are periodically collected and beamed up, to fuel cutting edge research at the Mothership. Architects designed the building to consist of 4 towers, each representing one core value of the Corporation. NOTE: Mayors are warned that all animals, utopium, and coins committed to missions will be permanently taken away in exchange for rewards. Some rewards can be bought out using Utopium."

NOTE: despite the description saying that some missions can be bought out, this is actually not the case.

Most of the missions require clones and/or animals to complete the mission. After you build the mission pod for that mission you will have to splice the professions in the Arrival Center. Note that there must be job vacancy in mission pods and the clone must be linked to the mission. See the article Splicing for more info. After the mission pod is built, the animals can be selected by tapping on them.

When you delete a mission pod, the pod will be removed from your city, but is still available in the Utopia HQ. The color of the mission card will turn light blue and all spliced mission clones will be discarded. Coins, Chroma or Utopium will not be subtracted from your total amount. 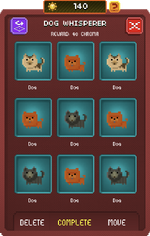 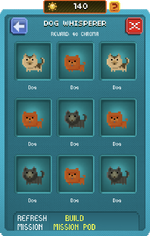 Daily, you get 4 free resfreshes. The missions that will appear after refreshing depend on the active Season. For Chroma missions it appears to be random, but the top two mission slots will show missions linked to the active Season. After using up all daily free refreshes, additional refreshes can be made at the cost of 1 Utopium each. When you complete a mission while having free refreshes left, the game automatically uses a refresh for you. When you complete a mission while having used up all your free refreshes that day, no new mission will appear, unless you either refresh it manually at the cost of 1 Utopium, or wait until you get new refreshes next day. You cannot refresh a mission when you've built the mission pod. You need to delete the pod prior to be able to refresh the mission. 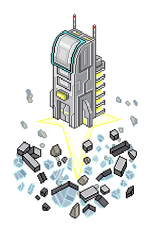 When you complete a mission, by pressing complete on the mission screen, a countdown of 5 seconds will start. After that, the hatch of the pod closes and the pod will generate thrust, creating dust clouds. Then, the pod will move upwards while scattering the astroglass floor it launches from. The previously occupied space will now be empty and available for you. The mission pod will fly into space with all clones, animals, Coins, Chroma and Utopium it required. With other words, the animals you send away will be subtracted from your the list of available Animals and required Coins/Utopium/Chroma will be subtracted from your total.

Community content is available under CC-BY-SA unless otherwise noted.
Advertisement